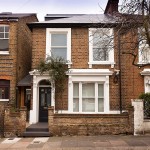 There is restricted parking around Acton Central so it is advisable to come by public transport rather than by car as parking can be difficult and the neighbours would be very relieved not to compete for parking space.There are limited pay parking spots on Churchfield Road.